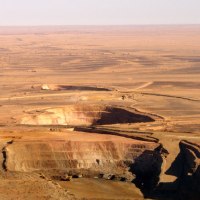 Moreno-Ocampo says ICC has not requested extradition of Senussi and NTC chairman Mustafa Abdul Jalil says Mauritania will be handing Senussi over to them. But when? No one is buying this story about his health, and in any case, Libyan prisons are probably better than poorly-equipped and under-staffed Mauritanian hospitals. Mauritania couldn’t even treat a girl with a gunshot wound after Aziz’ son Badr shot her. Ironically enough from the point of view of the Senussi story, they sent her to Morocco!

Why has the ICC not been in contact with Mauritania? Because none of the major European players want to risk him spilling the beans about their shady deals with Libya under Gadaffi. A friend in Sudan said to me recently, ‘the ICC is a white man’s court for “criminals” from third world countries’. It has barely any credibility even in countries for which it can be bothered to issue warrants.

Bye the way, the crack in the headline about sharp suits is directed towards Mr Jalil, pictured with Mr Moreno-Ocampo sporting some rather ostentatious Saville Row threads. Marvellous how many different ways those unfrozen assets can help a chap out.

Despite an Arab League observer mission in Syria, there has been no let up in the bloodshed. Author and scholar Gene Sharp told RT in an exclusive interview that non-violence is the only way for people to bring about a democratic change.

“You get bloody mess when you get people standing up and saying we want a change because dictators don’t want to be told “We don’t love you anymore”. They do not like to be told “It is time for you to go” and they will use whatever means of control,” Sharp says.
Meanwhile, reports of bloodshed in Syrian cities escalate daily. Syrian activists said Monday that government troops opened fire on protesters in the restive city of Homs, killing more than a dozen people.

The UN estimates that more than 5,000 people have been killed since the country erupted into conflict in March.
Gene Sharp says that if Arab world follows a violent path, more casualties are guaranteed.

Sharp says that change can be brought out by many ways. “But what kind of change?” he asks.

What Sharp warns about is that change might pave the way to new dictatorship, but not to democracy.
“Change can be from dictatorship to a new dictatorship,” he concludes. Sharp believes that military intervention as an option to solve the situation in Syria will lead to chaos instead of new democratic regime in the country.
Speaking about the previous bitter experience, referring to Libya, Sharp says that the US has no right to meddle in other countries’ foreign affairs. “My opinion is that the US government should not be intervening military in the name of establishing democracy,” he says.

Meanwhile, Syrian President Bashar al-Assad delivered a 100-minute speech on Tuesday which failed to impress as he repeated previous statements, mocked the Arab League, and failed to offer any hope for an end to the ongoing bloodshed. In his first speech since June 2011,  al-Assad said he’s “not someone who abandons responsibility”. Once again blaming unrest on “foreign planning,” Assad promised to “fight terrorists with an iron fist.” He also made vague promises of reform, saying Syria might hold a referendum on a new constitution, maybe in March. Later today, The UN Security Council will also meet for the first time this year to discuss the situation in the embattled country in another closed-door meeting.

Meanwhile, there may be a new way to end the bloodshed in Syria in the offing. Avaaz activists have covertly compiled a harrowing report of crimes against humanity conducted by Assad’s regime, and it is making world headlines. Using that list of atrocities to as a call to the UN Security Council might help bring a case against Assad and the leadership of his forces before the International Criminal Court (ICC).