Police attacked the protesters at around 3am, just a few minutes after I closed this blog post.

Sorry about the video quality, but it’s really hard to upload video in Mauritania because the connection speeds are abominable, so we must be patient and understanding.

If he thought he could dampen people’s enthusiasm for the latest mass rally called by the group of opposition parties in Mauritania, or divert their attention, Aziz got it dead wrong. Despite his efforts to (re)position himself as a man of the people, a “president of the poor” to echo his election campaign statement, and regardless of news promising jobs and pay increases, tens of thousands of people still turned out to deliver the same message: “leave”. This time, in fact, they were joined by even more youth movements.

This video of the march is just as impressive as the ones from March and April.

And here are the February 25 Movement protesters in fine form 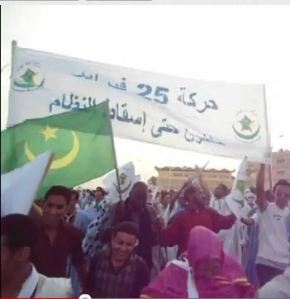 When Biram ould Abeid, the president of anti-slavery group IRA, decided to burn some books of Islamic jurisprudence because they mentioned slavery, it was all over state TV. But this huge rally, like the others, was given about 45 seconds of airtime.

Here is a gallery of images from the events of the day so far – remember they intend to stage a sit-in, they have erected tents, brought supplies, and even arranged a water truck, and are hoping to survive the night. There have been several stories going around about the police planning to kick them out, or attack the camp in the early hours. Most of these images came from the Mauritanie Demain and February 25 Movement FaceBook pages. you can also find more news and updates on Twitter under the #Mauritania hashtag, and if you read Arabic or can cope with half-baked Google translate, on this blog and from these Twitter users: @medabdou, @ahmedj85, @ahmedbah, @Rev25fev, @nahmedou, @babadeye, @sidimedlemin, @darchhr, @eddennine, @mahmoume, @tahabib    @mauritaniedem1